Excerpt from the Vampire King of New York & A Party Announcment 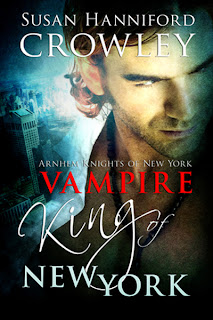 Here's an excerpt from the Vampire King of New York!
Maximillion Vander Meer stood in the jagged mouth of the ice cave with a wolf skin girding his loins
and fur boots on his feet. A frigid breeze breathed its welcome over his bare chest, arms and legs.

He smiled and closed his eyes to step back into the Viking past he loved, where he was free. He threw back his head and howled in exuberant abandonment. Then he ripped off the wolf skin and kicked off his boots. Max ran to the shadowed alcove he knew so well. A flicker of the past sparked in his brain and Vikings filled the cave, their voices rich in the chant of a ritual forgotten in the modern age, invoking the protection and wisdom of Odin, Thor, and Freya. Then he blinked and they were gone. Their voices silenced by time.

Every time he entered this sacred place hollowed out by his ancestors, their presence worked magic and distracted his weary heart from the curse inhabiting his body. This power brought him back to the Viking warrior deep within him, as only here could he reconnect with his lost humanity. Every passing moment the curse pulled him further from whom and what he’d once been. That was the danger in being a vampire. It wasn’t the chill of his body, but the distance that crept into his heart. He was on the edge of forgetting how the laughter of his son warmed him to his toes. The memory of Svenna’s delicious heat as her soft skin lay against his flesh igniting the fire between them, slipped through his fingers like water. Inhaling the fragrance of flowers in her hair had made him feel powerful. Even the excitement of the next adventure filled with salt spray and swords clashing faded away. His heart no longer raced.

The dire flaw in immortality was the sameness. Centuries of monotony blurred into others. Few ancient ones survived the deadly soul-numbing tedium of every day being the same. Closing on a thousand years, too many chose to lie in the sun and burn in agony over the course of two days until they crisped away in the wind. When the true burning began, night, the blessed night, offered no reprieve. The recent “chosen” death of his friend Coelhus was etched in his memory, making Max’s need more urgent than it had ever been. Coelhus had given up. After centuries of dreaming of a woman named Celeste, he ceased to believe she could be real. Coelhus could no longer bear the loneliness and the endless searching. Consumed by his dashed dreams, he gave his body to the sun. Max stayed with him in his last moments, and while he couldn’t deter his friend, he resolved not to end in ashes himself.

Time had robbed him of love, but today, in this moment, Max meant to get it back. Right now! Only this sanctuary of ice and stone seemed real to him; the human world faded into insignificance. Even the responsibility he owed his own kind lost its meaning. He had come to make a last sacrifice. If it didn’t work, he didn’t know what he would do next. His belief, however antiquated when viewed by others, never failed him.

He had nothing to lose, and everything to gain. Since the death of his wife many centuries before, nothing more could happen to his empty heart. The feeling of being human haunted him from time to time like an elusive fragrance or taste. Memories were a different matter. The curse, as he called it, made every memory eternal, the pain as raw and consuming as the day he’d lost her.

Squeezing the ancient dagger in his fist, Max stepped up to the frozen altar. The three carved stone figures stared blankly at him. Time, and a growing sophistication, taught him that they were nothing but stone, still the part of him that was Viking would always believe. Holding fast to that reverence of a bygone age, he stood before them.

“I do not call on you, Odin, Father to all, but I respect your wisdom.” He bowed. “I do not call on you, Thor, the strength of every warrior, but I respect your power.” He bowed again. “I call on Freya’s mercy to regain my house, to find the only woman who can heal my heart.” Kneeling with his gaze fixed to the ground, he then rose to stand over the frozen altar. Before the feminine carved figure, he sliced his forearm and let the blood drip onto the icy surface. “In the name of Freya, let me be worthy. Lead me to love. Help me find it or lock me in the ice forever. I can no longer bear the torment of life without true love.”

Now for the party announcement:
I will be participating in the multi-author party at The Romance Studio on Thursday, June 27, 2013.  It's an all day party and yes I will be giving away an ebook of Vampire King of New York.  Not sure what format yet.  How do you find this party?  I will be publishing the link on Facebook and Twitter as soon as I get it.
--Susan


Posted by Susan Hanniford Crowley at 10:15 PM No comments:

Susan Hanniford Crowley
I am married and have two children, two cats, one dog, and a snake plant.